Here we meet Gary who works in our IT department at Central Support in Birkenhead – he tells us about his journey with Potens beginning as a Support Worker!

“I joined Potens in May 2013 as a support worker at 7 Park Road South. I worked at the service for a year and a half and I really enjoyed the variety of being a support worker. The ‘every day is different’ thing always appealed to me. The staff team who I worked with were great and made me feel very welcome. After a year or so I started to think of ways I could progress myself in the role or elsewhere within the company. I started to help people out in the service by teaching them some basic IT skills. It was something I enjoyed doing and made me feel like I was helping to increase our standard of work. 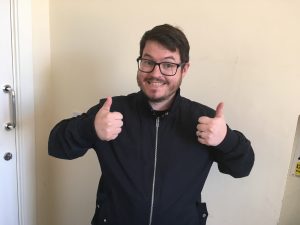 After some time, I saw that a temporary position came up in the Potens IT department to provide IT Support and training to cover Rachael’s maternity leave. Having previously worked in IT, I thought that this would be a good way of getting back into the IT industry.

With much luck, my Caresys knowledge and experience I landed the position! I must admit that getting a job and providing IT support for Potens after only two weeks of training was the scariest thing I have ever done – I suddenly felt as if the weight of the company on my shoulders! I quickly learned that I had a massive amount of help and support around me and mainly in the form of my line manager Frank Walsh who I leaned on heavily during those first months.

Shortly after Rachael returned to work, and not too long before my contract was up, Rachael was pregnant once more, which was also great news for me as there was a need to cover more maternity leave! Potens asked me to stay with the IT team for good and gladly I accepted without a second thought.

4 and a half years later I am still here, and I still love my job. I have seen the company continue to grow in that short time and it has been interesting to see how the use of technology has increased within the business. I am extremely excited to see where the future leads. “