Terry who lives at Heath Lodge is a massive Warrington Wolves Rugby League fan and this week received a surprise visit from one of the first team players!

Manager Lorraine explains how this all came about:  “Terry is a huge Wire fan and was really upset when his Warrington Wolves Rugby cup broke recently. Staff contacted Wolves Stadium to see if they could get a cup for Terry, due to the shop being closed in lockdown. They said they could get a cup for Terry, but he would have it hand delivered by a first team player!  Player Jack Hughes came to give Terry his cup and very kindly allowed us to get some photos with him for Terrys photo album. We have never seen Terry so happy. He chatted to Jack and showed him his room with all his Wolves memorabilia!”

Amazing! Thank you to Jack and everyone at Warrington Wolves 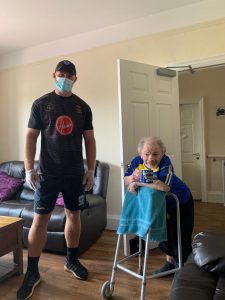