Aaron who is in year 11 at Poten’s Arbour House school in Weymouth has been saving his weekly reward vouchers and instead of spending on himself has treated his friend and donated to a local food bank.

“All the children at school have a choice to bank or spend their weekly rewards. Aaron had saved about £100 and so asked if he could take  his friend Cameron out for dinner and pay for the meal himself before Cameron moved on to college. He also bought a photo frame, made a photo collage of all their good times together and gave it to Cameron at their meal.”

Aaron then had plans for the remainder his money.

“Aaron asked his friends, Roxston, Charlie and Riley, if they could help him with a trip to Aldi in Weymouth. They spent his remaining £60 on a food and essentials shop including rice, pasta and dried and jarred food. He also bought female hygiene products and toiletries. His friends helped him pack the shopping. Aaron then took all the items that he had bought to the local Food Bank in Weymouth, and donated them all!”

This amazing gesture depicts the kind natured and thoughtful person Aaron is – putting others first.

“I thought this was an incredible thing to do. We are really proud of him.” adds Julie 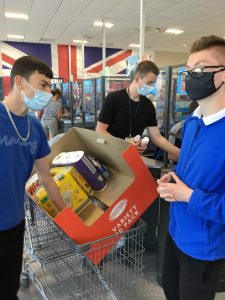