Over the last month our West Lancashire Supported Living team have been focussing on supporting people to put their trust in themselves and the staff team who support them in making decisions and building their independence and confidence. Here they demonstrate an excellent example supporting Christine to go to the hairdressers independently.

“We have been supporting Christine to go to the same hairdressers over a period of time so she could build up a relationship with Alison (stylist) and feel confident to hold conversations with her, as well as tell her how she wants her hair styling.

The first steps involved staff completing ‘travel training’ with Christine including travelling on the bus and walking the route to the salon.

“Once Christine got used to the route we began to reduce the time we went with her on the bus and encouraged her to take the first step of catching the bus with a fellow service user into town and back.  It was a success and she returned very proud that she had achieved a goal.” Joanne explains.

Christine’s team then sat down with her to plan her next goal of making a hair appointment herself and attending independently.

Joanne adds: “She was a little hesitant at first but we felt it was time for us to put our TRUST in Christine and our approach, and put it into practice. The day came for her appointment and staff ensured Christine had her mobile phone with her and they talked her through each stage.”

Christine put her TRUST in her staff and headed on her way to her first independent hair appointment!

Joanne adds: “Christine’s trip was a huge success – she managed to successfully attend the Salon, have her hair styled the way she wanted and return home safely. Her self-esteem has rocketed and we are all delighted with her smashing a key independence goal!” 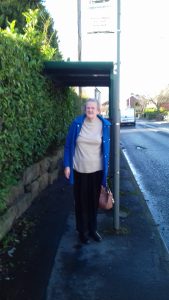 Find out more about our West Lancashire team here