Promoting our Value EQUALITY last week 8 pupils from Potens’ Specialist School, Arbour House, in Dorset met with 8 Dorset Councillors at County Hall to talk through issues that matter to the children as part of ‘YouthVoice’ Summit 2019. Part of their KS3 & KS4 work on ‘Democracy’, the children had some amazing ideas, demonstrating the values and talking through issues that are important to them as young people living in Dorset.

The group told Councillors what they like and don’t like about Dorset. Top things they like included: trees, the countryside and coastlines; local and small businesses; activities for young people and that ‘people are nice’. They explained that they didn’t like: litter; public transport; drugs and buildings taking over the countryside.

The young people and Councillors then worked together to design a “campaign pitch”. The aim of the campaign pitch was to try and influence others to vote for it! Reducing litter campaign and Happy Dorset campaign were the 2 pitch Finalists! 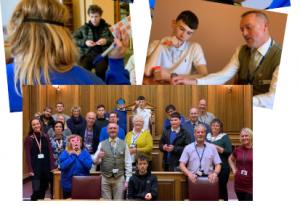 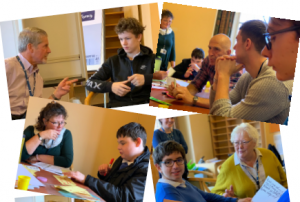 Young people and Councillors visited the Council Chamber and sat on the red leather seats. Everyone asked questions about how the Council worked, it’s membership, who seats were assigned to and the rules… young people even tried out the microphones!

The pupils received some lovely feedback from the members of the Dorset Youth Council: “On behalf of Dorset Youth Council thank you so much for organising today’s visit. Arbour House students were incredibly astute. I loved the questions they asked of Councillors, at times, putting them on the spot. Brilliant!”

Well done to KS4/5 Teacher Gemma Deadman for organising the event – the next step will see the children working with Dorset Councillors to create a video to drive forward their campaign.