It’s the last day of Mental Health Awareness Week and today we hear from Michael who lives at Orme House in Llandudno, North Wales. Michael feels he has really benefited from having the support of social care services to offer him support throughout his life. He asked his staff team to help him share his story.

Michael had a chaotic life after leaving school and found himself mixing with the wrong people. Michael had his own flat but due to a combination of drug taking and his mental ill health he found himself unable to manage his flat and his life – he was admitted into hospital. 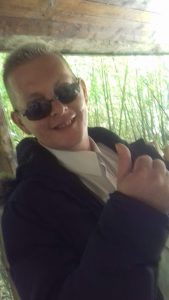 After spending some time there, Michael eventually moved to Carreg Fawr and worked with staff there on overcoming his drug use and rehabilitating back into the community. Eventually, Michael was well enough to move on from there and began visits to Orme House before moving into the service in October 2015.

Since Michael has moved to Orme House he has worked hard towards regaining the independence he had when he lived in his own flat – at times a challenge – but Michael has worked with staff to increase his skills and confidence in every area, including cooking, shopping, self-administration of medication and managing his personal care.

Michael was anxious each time he tried something new, but with support and reassurance from the staff team, his confidence has grown and he is now very independent.

Michael is often seen out shopping for his food, cooking in the kitchen, collecting his medication, keeping his room clean and tidy and also, which has been great to see, Michael interacts with other residents and makes plans to go out with them and socialize away from the service. He loves trips out and has been to Alton Towers, Blackpool Tower, Manchester, cinema trips and out for meals with his friends.

Michael’s relationship with his family has really improved too with his Mother telling us that she really enjoys the visits she has with Michael now – just sitting and hearing about the wonderful experiences he is having in his life.