After moving from hospital in 2017 Liam, who lives at Cae Glas (residential and nursing service for individuals with mental health needs) in North Wales, has transformed his life and is proud to share his story. 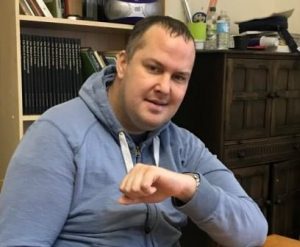 At Cae Glas I met another resident who I really got on with because we liked the same things and she made me laugh. She quickly became my girlfriend and we started going on day trips together and we even went away to Llandudno for a couple of nights. My girlfriend really made me conquer my fears with going out of the home and my anxiety started to reduce because I know she was there with me.

In 2018 I decided I really wanted to get in control with my drinking as I felt it was really affecting my mental health. The staff at Cae Glas had been encouraging me to stop drinking alcohol and I decided to take their advice. With the help of staff I signed up to a programme to help me stop drinking. At first I struggled, but I realised I needed to do this for me. I tried really hard and from February until the present day I have been teetotal.

The staff at Cae Glas have been really supportive and are down to earth with me. I feel I can have a laugh with them. Being at Cae Glas has changed my life and has made me a much stronger person because I know there is always someone there for me.”