James lives at Heathfield Gardens in Derbyshire and after many changes in life has now found his ‘forever home’ and is being empowered to make decisions in all areas of his life. With the support of his team he has shared his story…

“James came to live at Heathfield Gardens in September 2018. Prior to Heathfield James had a negative experience within shared lives after his home in Heanor had been closed down. At that time the request from the social worker was for a temporary placement as social services were looking for James to be moved to a supported living service. After a few days living here, James said that he would like Heathfield Gardens to be his ‘home forever’. 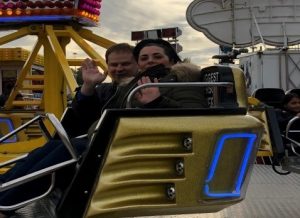 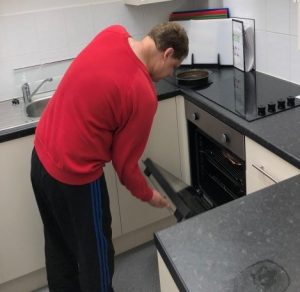 We worked with his Social Worker to make this wish happen – but initially James was worried and needed a lot of reassurance to understand it was a permanent placement as he had experienced so many changes in the past.
Today, James knows that Heathfield Gardens is his home and never asks staff for reassurance anymore – he says that Heathfield is ‘like a family’.

James has formed good relationships with the other residents and made a decision that he wanted to reduce his days at his Day Service and join in more activities and day trips. In March 2019 James decided that he didn’t want to go to Day Centre anymore.

This decision led to more decisions!

In the beginning of March 2019, while out in the community, James went to a charity shop and mentioned to one of his Support Workers that he would like to work there. After more discussion and exploring with James what having a volunteer job meant, an interview was booked, and James started to volunteer at YMCA in Sutton for 3 hours a week.

James is always busy, including attending the Towers DISCO on Thursday which he loves and cooking his own meal on Wednesday night. James chooses what he wants, makes a shopping list and is supported to go to Co-Op to get what he needs. James also enjoys going out for meals and shopping! He has also decided that he would like to attend a gym and this is now his next focus!

James loves new experiences and last year he went to the Goose Fare and to Alton Towers (scare fest) where, for the first time in his life, he experienced roller-coaster rides.

James tells staff daily how happy he is at Heathfield Gardens and how it’s his ‘home forever’ and doesn’t want to ever move!”