Here we hear from Daz Matthews who tell us all about his amazing journey – a real inspiration!

“During my teenage years when I amassed 94 criminal convictions I saw a Psychiatrist and said that I thought I was suffering from schizophrenia due to my violent behaviour. I was dismissed as though I was trying to get out of prison and have an easy ride in a hospital by the Psychiatrist. 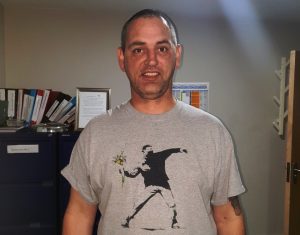 20 years later I was diagnosed with Paranoid Schizophrenia due to the improvements in mental health care in prison. I struggled with my illness for all those years undiagnosed. However, once diagnosed and on treatment I gained an insight into my illness. But, after five years in hospital I still resorted to drink and drug abuse again upon release. I was immediately recalled for two years.

When I approached being released again I was told that next time I would be recalled for four years if I abused substances again. When I weighed up the fleeting buzz of getting high with four years in hospital it wasn’t worth it. So, I decided to stay clean and sober until my section was lifted in three to four years’ time.

I have now been out for over two years. I haven’t touched drugs or drink. I now love being drug free and sober. I have got into it. The ‘tough love’ aspect of the section has worked for me. I don’t intend to drink or use drugs again when my section is over. Clean living has grown on me.

Now, I have renewed contact with my daughter and granddaughter. I have completed a counselling course at college. I have passed my driving test. I attend and work voluntarily for a church. I deliver training to student Doctors once a week. And, above all – I am free.

I don’t look over my shoulder anymore for the Police or enemies. The zero tolerance drugs policy at Potens was a major factor in my rehabilitation as I was previously released into another company’s house where drugs were rife so I slipped.

Thanks for everything so far guys. ”